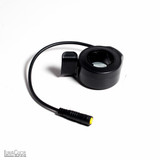 See our Knowledge Base article for compatibility and full selection

Works well, get a extra.

They are easily damaged &amp; are adversely affected by harsh chemicals. Mine fell apart after I used brake cleaner to remove my grips &amp; it made the plastic crumble.

This throttle broke after a few rides. Built like a cheap toy. Not a reliable throttle. Do not buy. Better yet get a Luna throttle. Thumb throttles break, but if they cared and made them with parts that don&#039;t break of for a few bucks more I would recommend to buy one.

The throttle works. I like the thumb control but it appears to only control from mid level to full position. I.E. the first half of its range does little to nothing and when it does start working you are at 40-50 percent throttle. I didn&#039;t see a way in the software to modify this behavior. mostly I use PAS but it is nice to have throttle mode when needed.

Be careful not to leave it in detent &quot;on.&quot;

The product mounts and works as advertised. But it has a detent &quot;on&quot; position. That is, once you engage the throttle and let go, it doesn&#039;t return to &quot;off.&quot; It detents to a very low &quot;on&quot; setting. This causes two problems. First, you can be in pedal assist zero and with the throttle in the detent &quot;on&quot; position, the bike is still powered and moves with electricity. This surprised my rider and took some time for us to figure it out. Second, if you shut off the computer with the throttle in detent &quot;on,&quot; you&#039;ll get an error code 4 when you turn the computer back on. I would have liked to seen a user&#039;s manual cautioning DIY installers of these functions.

=====
LUNA RESPONSE:
Hello, if the universal thumb throttle is a bit sticky you most likely have the bracket tightened too much. If you slightly loosen it this will go away. There is no detent in this throttle.
~luna cs
======

Would like a more solid feel, and ability to install without having to take off the handlebar grip and other accessories. Overall decent quality and functionality. Seems to go from zero to max W output regardless of how far it is pressed, but the throttle is incrementally increased from slight to heavier depress. So, works as expected. (I have a 52V battery, this device specifically says for 48V system, so that may be the difference in &quot;ideal&quot; operation.)

This doesn&#039;t seem to do fine low speed control well at all. You press the lever a little, nothing, a little more, nothing, a little more, then suddenly about halfway through the lever travel you are at about 40% throttle. Above that initial level it does seem proportional. It is not clear to me if this is the fault of the throttle, or the way the stock motor controller is set up. (BBS02 from 10/2017.) The physical lever is nice. The action is good and you can switch between right and left sides, works equally well. The thumb pad is wider than the clamp ring however, which is not good, because if you mount it to close to something else (like the power/plus/minus control that came with the kit) it will foul the lever movement. Because it is a thumb lever it is not easy to a precise moderate speed other than wide open for a length of time. Good for brief power bursts only, at least the way it is working with my motor.

not for all bike

this works as expected when plugged however cannot be install on my byke with a 135mmm handlebars. this have to slide in .. so useless in my case.

VERY easy to use works great

Good compact alternative to twist throttle. Used on a mustache handlebar the twist throttle would have require cutting 50% of the grip.

Works well could be improved

It does it&#039;s job well. The action of the lever is smooth and it applies the power evenly across the action. The housing is a little bulky. I have it next to the brake lever so I can reach it. Due to the bulk I was not able to place it right next to the brake lever support which left a gap of un-used
handlebar space. The cable was very short compared with the brake cutout signal wires. Since they all join the main wire harness at the same place it forced me to loop or otherwise bunch the brake wires. I would have bought an extension so all the cables would be similar lengths but the only extension available is 40 inches. So I could cut and solder the extension or just cut and extend the original wire if I want a pretty harness. And I want a pretty build.