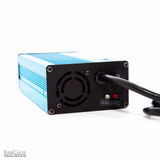 NEW the blue Luna 3A chargers now have a toggle switch to charge to 80, 90 or 100 percent which has the potential to double the life of your battery.

This Charger is a very small electric bike charger for 48 volt battery (13s 18650 lithium ion) which charges to a maximum of 54.6 volts.

Unlike other USA seller we are selling a quality charger which is small and robust, made from quality aluminum and nice blue color made to quality specs with a reasonable price.

This charger has a quality xt60 connector. We provide a male connector (pictured) so that you can easily convert your existing ebike battery to the quality that is the xt60 without soldering. (read our story on ebike connectors)

It is a 3amp charger which will charge a 10ah battery in less than 4 hours. When the battery reaches close to full the charger automatically slows down and shuts itself off when it reaches a maximum of 56.4 volts.

This charger was designed to be used with our 13s packs which is 48v lion. If you are using this charger for your  own battery pack make sure the voltage matches what your battery pack requires for  maximum voltage.

Incorrectly charging a battery pack can damage your pack and be a fire hazard!

For documentation on the Mini Charger please see our Knowledge Base

Change the description of this product if it only does 100% charges. The description says &quot;Charges in three different percentages - 80%, 90%, and 100%&quot; but the video says it only charges to 100%. Which one is it?

---
LUNA RESPONSE
---
It has variable charge settings as stated in the description. The video was made before a later revision and we have not gotten around to making a new one yet.

Mine was also apparently part of a defective batch, as it was dead on arrival. Luna would benefit from some form of OQA on the items that are shipped.

Would be nice to get info book with this charger because my charger leds were flashing on and of and fan was cutting out ever 3 seconds for the first 30 minutes of use because my battery was dead ,but my volt meter showed it was working , did not know if it was a problem or not. appears to be normal operation

First time using lithium and went with a name I trust

After using SLA&#039;s for 3 years quite happily I know I had to upgrade so I got a new second hand 48v 20Ah Luna cube, I decided on that investment to make sure I got a charger to match it. After looking around I decided to go with the 48v mini charger for a variety of reasons, it&#039;s ability to charge 80-90% is a good one, the size is perfect, the cost was actually less than local no name lithium chargers that were brobably bulk bought and resold at a handsome profit. Leaving me with a simple decision. The charger had the right connector for the battery which made things easy to put together, I charged the pack for 8 hours and the pack did get rather warm. But on use the pack works well. The charger is simple to use, I cranked up to 100%,waiter till the fan cut out and went about my business. It&#039;s quite noise, I wasn&#039;t prepared for that, it&#039;s also a lot smaller than I imagined. I will end up putting a watt meter in between the battery and charger as I like some visual indication of what&#039;s going on but all in all I&#039;m happy with my investment.

not compatible or defective

This charger did not work with my 48V, 12AH Panasonic battery pack. It cycles on and off, and will not charge. It produces voltage, but the controller freaks out for some reason.

Mine was defective. Took 3 weeks to get resolved. Painful drawn out process.

Can&#039;t recommend, mine was defective. Took 3 weeks for Luna to make good on it, customer service was slow and painful to work with. I like that they are here in the U.S. but I&#039;ll look elsewhere first. If you do buy from Luna get the 5 Amp charger s the 3 amp units take much longer than you would expect to fully charge.

Works well for me although not sure about the accuracy of the 3 position switch, check your volt meter for best results. Well worth the extra coin for a little faster charging and safety.

I love it. But, what can you say. It charges as fast as you should charge any of these batteries really. Had to make a little xt-60 to PowerPole adapter, but that was a small hurdle to clear. I could not be happier.

I would highly recommend grabbing one.