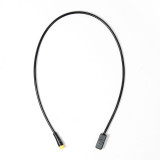 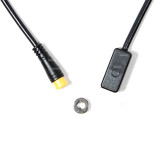 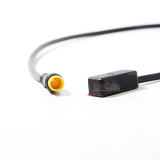 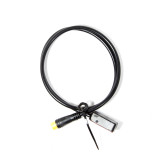 Easily installed by plugging one end to your Bafang controller in the appropriate plug and the other end on the handle of your brakes.

See video instructions on how to install here: https://www.youtube.com/watch?v=dlvBxedXTZ8

Can also be used with mechanical disc brakes as well for those who do not want to use the Bafang stock ebrake handles.

My Schwinn has the combo brake / shift assemblies and I needed a solution. This assembly worked perfectly with a little epoxy to hold the magnet on the brake lever, then carefully placing the sensor with the high strength tape on the bottom of the assembly. No modification whatsoever to the assembly.

Sensors work great, but can be a real pain to install.

I have nice disk brakes on my bike and obviously wanted to continue using them. I bought these sensors, and they do indeed work great when installed, but can be a real pain to get mounted properly and securely. I have Avid Elixir RSL disk brakes, which have a round body and levers which made it nearly impossible to use the provided adhesive strips. This is likely the case with most end users since most brakes just don&#039;t have uniform flat surfaces where you would need them. Many users have mentioned using epoxy and such, but I decided to design and 3D print simple brackets that snapped onto the brake body and lever. Regardless, you will likely spend a few hours getting these things mounted, and they might not look too pretty in the end.

Just to be clear, I would not entirely fault Luna for these shortcomings, it would be nearly impossible to design a sensor that could easily mount on all brakes, there are just to many different kinds. So it seems like they chose to provide a reasonably priced set of sensors that the end user must customize on their own.

However, I believe some of these problems could mitigated with a mounting kit of sorts for these. Perhaps you should include a few loops on the sensor body that could accommodate a few zip ties. This likely would have been enough to get these mounted on my round and tapered body brakes. Likewise, a little holder for the magnet, or even just a small flat surface, with a few zip tie loops that would facilitate easy mounting. Zip ties are never too pretty, but do often work fine for long term solutions(as long as you don&#039;t use Harbor Freight zip ties!). I&#039;m sure something like this would incur additional cost, but a $10 kit of small injection molded plastic pieces and zip ties is probably worth it compared to a few hours of tinkering for many end users.

I have hydraulic breaks on my bike that I wanted to keep so these are awesome to convert them into ebreaks. They are so sensitive that I manage to get the engine to turn off if the breaks move just 1mm.

I was a little skeptical when I purchased the Disk Brake Sensors. Couldn&#039;t imagine that they would have the sensitivity to allow precise adjustment. Found that all components were good quality. Easy install. Thanks!

I was pretty excited with this solution, and even though it looks clunky on the front brake handles I did what ever I could to put it right. The sensor was literally 2 hairs close to the magnet and the screen reported that the break was activated... That was the same on both sensors.
It doesn&#039;t work all that well, recommend using the cable break sensors or design another solution.

Not as clean as dedicated cut-off levers but they&#039;ll do the job and were a lot cheaper.

Couldn&#039;t quite get these to work with standard Hayes Disk Brake levers; would need the opposite in terms of of operation with the magnet&#039;s proximity to the sensor (i.e. normally open vs normally closed circuit) instead of the way they currently operate. Still would be awkward to mount, the way the levers, sensors, and magnets are shaped resulted in @#*&amp;%.

I wanted to keep my integral RH break handle and rear shifter. This was a way to do that. I ended up gluing magnets in place vs using zip ties - for a cleaner install.

Took some thought as to how to mount but I figured out an easy way, for me

These are mounted so that when you engage your brakes it cuts the motor off.

The sensor is sticky on one side so it glued to your brake lever. I mounted the magnet butted up against the sensor when the brake is closed. Superglued to the brake. Ran superglue in the center hole that you might normally put a screw through. Will it hold? Time will tell.

For the money these are made very well at 4X the price.